CPSC urges parents and caregivers to immediately stop using the recalled cribs, wait for the free repair kit, and do not attempt to fix the cribs without the kit. They should find an alternative, safe sleeping environment for their baby. Consumers should contact Stork Craft to receive a free repair kit that converts the drop-side on these cribs to a fixed side.

The cribs’ drop-side plastic hardware can break, deform, or parts can become missing. In addition, the drop-side can be installed upside-down, which can result in broken or disengaged plastic parts. All of these problems can cause the drop-side to detach in one or more corners. When the drop-side detaches, it creates space between the drop-side and the crib mattress. The bodies of infants and toddlers can become entrapped in the space which can lead to suffocation. Complete detachment of drop-sides can lead to falls from the crib.

CPSC, Health Canada, and Stork Craft are aware of 110 incidents of drop-side detachment; 67 incidents occurred in the United States and 43 in Canada. The incidents include 15 entrapments; 12 in the U.S. and three in Canada. Four of the entrapments resulted in suffocation: a 7-month-old in Gouverneur, N.Y.; a 7-month-old in New Iberia, La.; a 6-month-old in Summersville, W.Va.; and a 9-month-old in Bronx, N.Y. Included in these incidents are 20 falls from cribs; 12 in the U.S. and eight in Canada. Fall injuries ranged from concussion to bumps and bruises. The cribs involved in these incidents had plastic drop-side hardware that had broken, missing, or deformed claws, connectors, tracks, or flexible tab stops; loose or missing metal spring clips; stripped screws; and/or drop-sides installed upside-down.

Major retailers in the United States and Canada sold the recalled cribs including BJ’s Wholesale Club, J.C. Penney, Kmart, Meijer, Sears, USA Baby, and Wal-Mart stores and online at Amazon.com, Babiesrus.com, Costco.com, Target.com, and Walmart.com from January 1993 through October 2009 for between $100 and $400.

The cribs were manufactured in Canada, China and Indonesia.

For additional information, contact Stork Craft toll-free at (877) 274-0277 anytime to order the free repair kit, or log on to www.storkcraft.com 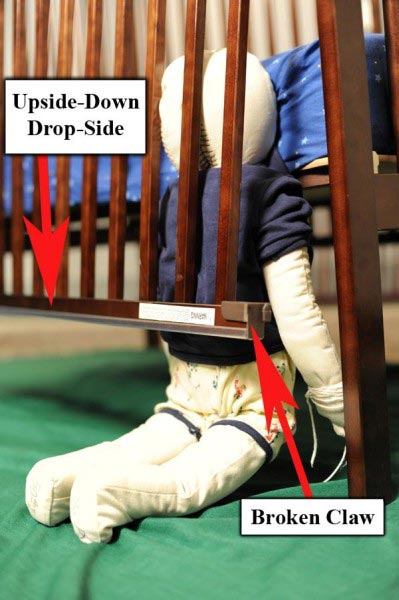 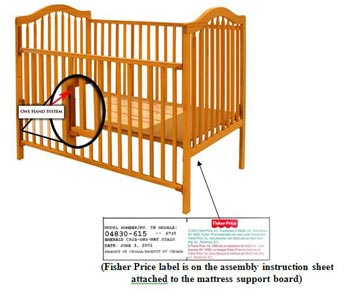 CPSC would like to remind parents not to use any crib with missing, broken, or loose parts. Make sure to tighten hardware from time to time to keep the crib sturdy. When using a drop-side crib, parents should check to make sure the drop-side or any other moving part operates smoothly. Always check all sides and corners of the crib for disengagement. Any disengagement can create a gap and entrap a child. In addition, do not try to repair any side of the crib, especially with tape, wire or rope.

CPSC is still interested in receiving incident or injury reports that are either directly related to this product recall or involve a different hazard with the same product. Please tell us about it by visiting https://www.cpsc.gov/cgibin/incident.aspx

The U.S. Consumer Product Safety Commission is charged with protecting the public from unreasonable risks of serious injury or death from thousands of types of consumer products under the agency's jurisdiction. The CPSC is committed to protecting consumers and families from products that pose a fire, electrical, chemical, or mechanical hazard. The CPSC's work to ensure the safety of consumer products - such as toys, cribs, power tools, cigarette lighters, and household chemicals - contributed significantly to the decline in the rate of deaths and injuries associated with consumer products over the past 30 years.

To report a dangerous product or a product-related injury, call CPSC's Hotline at (800) 638-2772 or CPSC's teletypewriter at (301) 595-7054. To join a CPSC e-mail subscription list, please go to https://www.cpsc.gov/cpsclist.aspx. Consumers can obtain recall and general safety information by logging on to CPSC's Web site at www.cpsc.gov.